How can I determine if I am getting a custom made foot orthotic device?

There are many kinds of in-shoe devices that are referred to as “Orthotics”. You will see advertisements on TV infomercials, exhibits at consumer shows and retail stores for “Orthotics”. Shoe inserts and arch supports are being increasingly referred to as “Orthotics”. Foot orthotics are prescribed and/or dispensed by many varied health professionals including chiropodists/podiatrists, orthopedic surgeons, sports physicians, pedorthists, orthotists, chiropractors and physical therapists. The general public will have a difficult time telling the difference between a true custom foot orthotic and an over the counter (OTC) type foot orthotic without asking the right questions. You must ask you foot orthotic provider if they are going to make your foot orthotic from a 3 dimensional cast of your foot.

The Prescription Foot Orthotic Laboratory Association (PFOLA) has developed technical standards to differentiate between various types of foot inserts (orthotics). The definitions are based on how the foot is evaluated and how the foot was casted.

The following are excerpts from PFOLA technical standards document on foot modeling and device definitions. These definitions are sent to extended health insurance providers to demonstrate they are reimbursing you for a true anatomical custom made foot orthotic which is made from a anatomical volumetric 3 dimensional model. 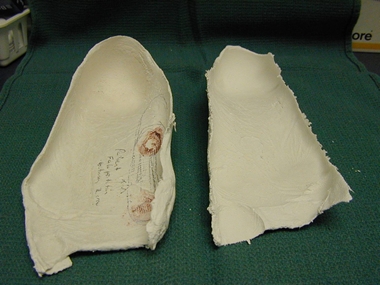 A digital AVFM must use actual 3 dimensional data points taken directly from the foot to duplicate plantar foot anatomy.

An in shoe device that is made directly from an Anatomical Volumetric Foot Model (AVFM). The AVFM is modified with the appropriate medial and/or lateral arch fill, lateral column expansion, heel expansion, and intrinsic forefoot and/or rearfoot corrections as defined by the prescribing physician. The entire dorsal surface of said device matches the surface of the modified, or corrected, AVFM.

An in shoe device that is made directly from an Extrapolated Volumetric Foot Model (EVFM). The EVFM is modified with the appropriate medial and/or lateral arch fill, lateral column expansion, heel expansion, and intrinsic forefoot and/or rearfoot corrections as defined by the prescribing physician. The entire dorsal surface of said custom device matches the surface of the modified, or corrected, EVFM. The ESFO will not approximate the contours of your arch as well as a ACFO. If a close fit to your foot contours is required an EFSO may be contra-indicated.

An in shoe device that is made from a library of pre-manufactured shells, pre-manufactured corrected positive molds or pre-determined digital shape files (from which shells or molds are milled.) The foot orthotic shape is chosen by matching a library shape with either an AVFM or EVFM. Over the counter(OTC) foot orthotics are LSFO. Some of these LSFO will be used by chiropodists/ podiatrists when a custom foot orthotic is not indicated. OTC Powersteps ® orthotic supports are a good example of LSFO that might be dispensed in chiropody/podiatry office.