Many parents become concerned when they see their child’s feet pointing inwards while walking, especially if it is associated with tripping. Other concerns include the abnormal shoe wear on the outside of the toe box due to scuffing of the toes while walking and the child complaining of being tired after walking. Sometimes the child will ask to be carried instead of walking. My goal as a chiropodist/podiatrist is to inform the concerned parent that in-toeing almost always self corrects as the child grows towards adulthood.

If you watch adults walk you will notice their feet will point straight ahead or outward. In-toeing (“pigeon toes”) describes a position where the feet turn inward instead of pointing straight ahead during walking or running. In-toeing is found in about 2 out of every 1000 children. In-toeing happens from birth to adolescence due to a delay in rotational or torsional unwinding during a normal bone development.
The vast majority of children who have in-toeing will gradually self correct until their feet point straight ahead as they develop into adults. The tripping associated with in-toeing also reduces over time. In a tiny proportion of children, this rotational unwinding that allows the feet to point straight ahead doesn’t occur on its own and might require treatment.

The most pressing concern of parent’s is the tripping that sometimes occurs while walking. Apart from this concern, children with in-toeing are generally healthy and have no limitations in their activities or sports. Children with in-toeing do not suffer from other congenital abnormalities or diseases such as arthritis. Parents can expect their child to live a normal, active, and healthy life.

Some children with in-toeing may have problems getting shoes that fit, because of the curve in their feet. A shoe fitting problem might make parents consider treatment for their child. In very rare cases, some children have a severe twist in the leg bone (tibia) or thigh bone (femur), which can be a concern because it looks bad, but as mentioned before this can self correct by adulthood. In a tiny proportion of children surgery will be required to correct in-toeing due to femoral or tibial torsion.

What are the causes of in-toeing?

To better understand the anatomy used to describe the causes of in–toeing you can follow the link to on this website to basic anatomy of the foot and the lower extremity. There are three causes of in-toeing in healthy children:

There may be a prior family history of in-toeing. Prevention is not usually possible because they occur due developmental or genetic problems.

These three causes of in-toeing can be identified by performing a series of measurements which involves taking six different measurements of the angles of the feet, legs, and hips when the child is in various positions. A gait analysis is also performed to observe to position of the knee cap and while walking or running. This allows for detection of the three causes of in-toeing.

What is internal femoral torsion or femoral anteversion?

When the onset of in-toeing occurs in early childhood, it is most frequently due to internal femoral torsion or femoral anteversion. Excessive internal femoral torsion is an inward twist in the femur (thigh bone), as shown in the accompanying drawing. All babies are born with some inward twist of the thigh bone. It usually gets better during the first years of life. In babies and toddlers, the ligaments and muscles that connect the bones around the hip are tight. As children begin walking, these ligaments and muscles become looser, allowing the hips to rotate more inward. If a child has an extra inward twist of the thigh bone, it may not show up until the child is 2 to 4 years old, because the in-toeing gets worse as the ligaments and muscles become looser. It can get most pronounced between 4 and 6 years of age. It is twice as common in girls as boys and affects both legs equally. Excess internal femoral torsion usually gets better by itself with time. In most children, the feet will point straight ahead or outward by the time they are 6 to 8 years old. Children with this condition often sit in the “W” position, with their knees bent and their feet flared out behind them.

Typically a parent will seek treatment for their 3-8 year old child because they have noted in-toeing. The child will stand with the kneecaps and toes pointing inward. Internal femoral torsion is identified by measuring and comparing the degree of inward and outward rotation of the child’s hips. 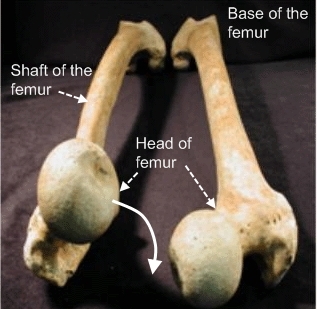 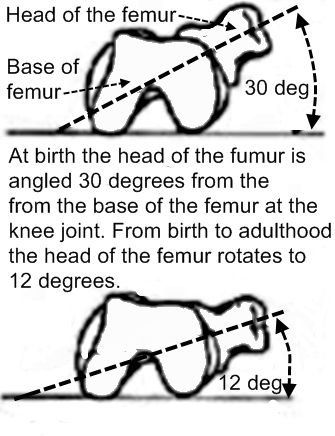 Your family physician/pediatrician or chiropodist/podiatrist may recommend you discourage your child from sitting in a W-position because it might exacerbate the torsional deformity. If tripping is a problem, gait plates may help to reduce symptoms of tripping related to in-toeing caused by internal femoral torsion. Gait plates force the older child to walk in an out-toed position. The use of braces and shoe modifications has been reported to have limited success. In a few children with a very severe inward twist in the thigh bone, an operation is possible. A pediatric orthopedic surgeon can perform a rotational osteotomy whereby the femur or thigh bone is cut and twisted outward, so the feet will point straight ahead.

What is internal tibial torsion? 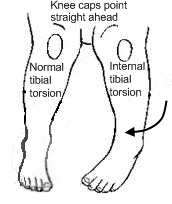 Internal tibial torsion is a twist in the tibia or shin bone. This can occur if the child’s lower leg (tibia) twists out of normal alignment. This can occur before birth, as the legs rotate to fit in the confined space of the womb. Some inward twist of the tibial bone is normal in babies. After birth, the legs should gradually rotate to align properly. Usually this twist straightens out during the baby’s first year. In some children, the twist doesn’t get straight enough that their feet point straight ahead or outward, and these are the children who still in-toe when they begin walking. Leg bones usually continue to grow straighter until the child is 6 to 8 years old.
Internal tibial torsion is present if the lower leg remains turned in. When the child begins walking, the feet turn inward because the tibia in the lower leg, just above the foot, points the foot inward. As the tibia becomes longer, it usually untwists. The most common overall cause of in-toeing is internal tibial torsion. Internal tibial torsion affects boys and girls equally. Generally, both tibias are twisted inwards in two thirds of the cases of in-toeing caused by internal tibial torsion. In the remaining on-third of the cases only one tibia is twisted inwards. The left tibia is usually affected more often. Parents usually notice internal tibial torsion about the time their child begins to walk.

If tripping is a parental concern gait plates may help to reduce symptoms of tripping related to in-toeing caused by internal femoral torsion. Gait plates force the child to walk in an out-toed position. Braces and special shoes have been reported to have limited success. One treatment that has been used for decades is a metal bar that is attached to both shoes. The shoes are positioned on the bar to force the child’s feet to point outward. This type of brace can be expensive, and often children don’t like to wear them. Generally most pediatric doctors don’t give any treatment for internal tibial torsion in young children. In a small number of children, the twist in the tibia doesn’t go away. If there is a severe twist in the tibia, the orthopedic treatment is to cut the tibia and twist it outward, so the feet point straight. This type of surgery is rarely indicated. Surgical intervention is something you must carefully discuss with your child’s family doctor or pediatric orthopedic surgeon.

What is metatarsus adductus? 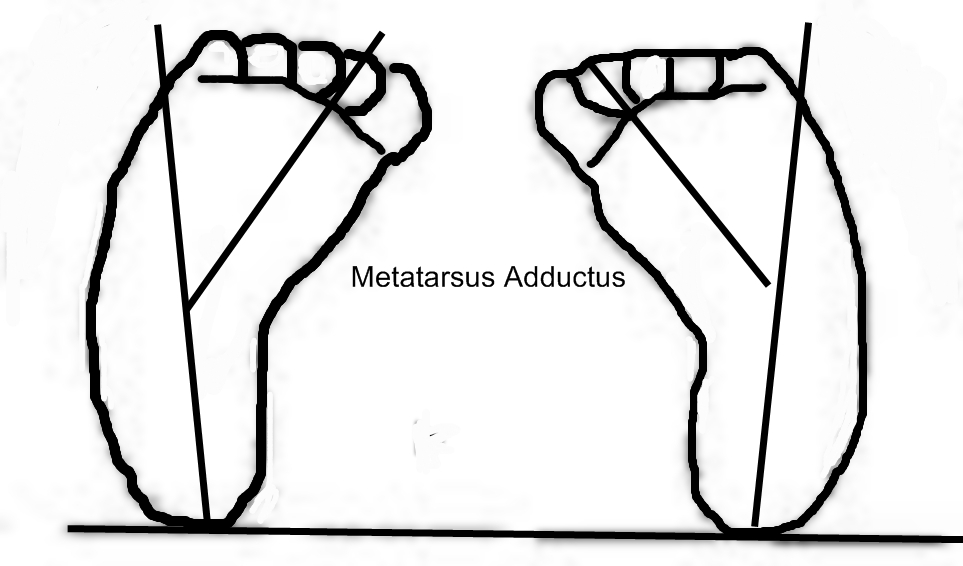 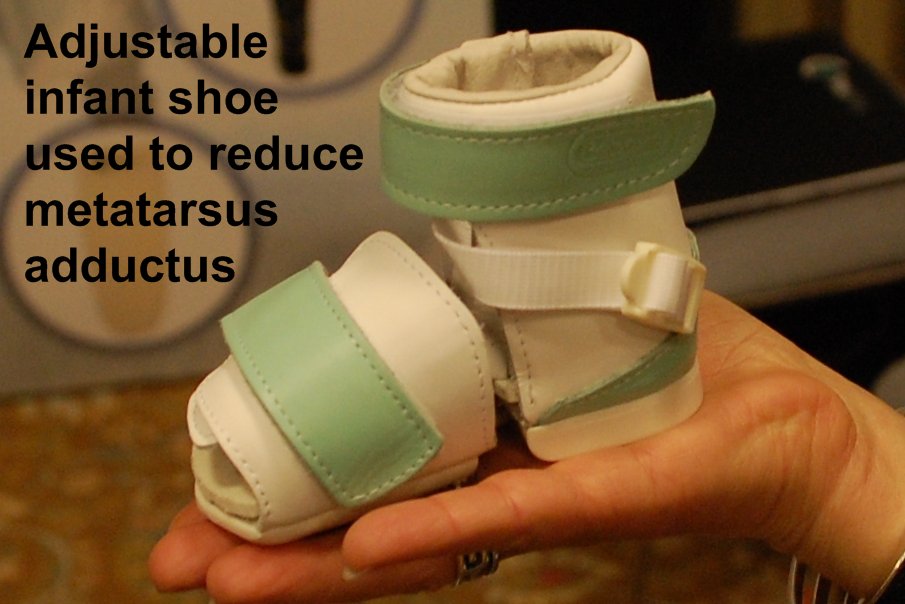 Simple metatarsus adductus in infants initially may be treated with passive stretching exercises. If the metatarsus adductus is not reducible, meaning that the forefoot does not return to a straight or neutral position, splints and/or cast treatment in early infancy may be required. Pediatric doctors have different protocols concerning when the casts should be put on, but many think that if the feet are still curved when the child is 4 to 6 months old, casting should be started. The casting should be finished before the child reaches normal walking age. If the feet still have some curve after the casting treatment has finished, this should not cause any problems with running and playing, and is never painful. An alternative to casting is a removable boot that can force the forefoot into a straightened position. A severe curve can cause problems with fitting shoes, and this is the main reason for using casts. Surgery is usually not necessary.